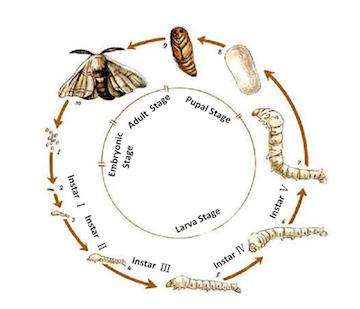 In its life, a silkworm must go through four growth stages including egg, larva (or newly-hatched silkworm), pupa and adult; so it's true metamorphic insect.

The body color of a silkworm will gradually change into blue and white as it grows.When the larvae grows to a certain extent, it must molt to allow itself to grow a larger new cuticle so as to continue the growing process.During the molting stage, the larvae will spin silk to fix its feet to the silkworm rearing seat without food or movement. This phenomenon is known as "dormancy", during which the silkworms grows new cuticles and shed the old ones.

The silkworm will increase by one instar each time it molts and from larvae to adult, it will go through the molting process four times in total, which adds up to five instars.During the period from newly-hatched silkworm to matured silkworms ready to spin, a silkworm constantly takes food and its weight will increase by about 10,000 times. All of these changes will be completed within about 22 days. The silkworm will shrink and become transparent before it starts spinning.Silk will come out continuously from the orifice of the spinneret at the front center part of the silkworm’s lower lip. The silk spat out by the silkworm is in the shape of an "8" and it takes almost 3 days from spinning to cocooning. 3. Silkworm of 2nd - 5th instar: a newly-hatched silkworm will become a 2nd instar silkworm within 4 days after molting and increase by one instar after each molting thereafter. A silkworm of 4th -5th instar grows most significantly.

4. At around the 7th day, a silkworm of 5th instar spins and forms a cocoon, and becomes a pupa within 2 to 3 days. The body shape of the silkworm may be shorter, fatter and dark brown, and it will become a moth through eclosion in about 10 days.

The moth will stop food intake and focus on reproduction as its only important mission. The tail of a female silkworm moth that has a big belly will emit sexual pheromones to attract male silkworm moths. Please pay attention to the tentacles of a male silkworm moth, which are the key tool in its quest for its mate.